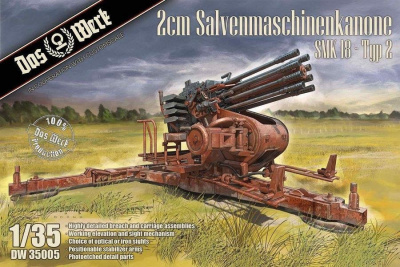 This is an injection-plastic field gun model kit. The SMK18 Type 2 2-cm cannon is a high-fidelity gun made by Germany during World War II. The idea was to shoot down enemy aircraft by simultaneously firing eight 2-cm cannons. The Type 1 had the cannons in a horizontal arrangement; the prototype of the Type 2 was built in 1939, but it proved to be too unstable for use, as there was too much of a load on its moving parts. This gun is currently on display in a museum in Moscow, Russia. This kit features highly detailed breech and carriage assemblies, working elevation and sight mechanisms, and a choice of optical or iron sights. The stabilizer arms are movable, and a set of photo-etched parts is included as well. Order yours today! [Includes]: Photo-etched parts