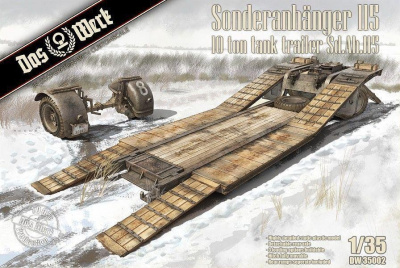 The Sd.Ah.115 was a heavy-duty, 2-axle transport trailer designed to carry German armor in service at the time. With a stated load capacity of 10 tonnes, the Sd.Ah.115 was capable of carrying a wide variety of vehicles.In fact, a wide variety of vehicle loads can be seen atop the Sd.Ah.115 in period photographs. An earlier 8 tonne version first served in the Spanish Civil War. The 10 tonne version was deployed to transport the lighter Panzer I and II tanks during the early years of the Second World War. As the Wehrmacht moved through Europe, the Sd.Ah.115 could be seen carrying a wide variety of non-German vehicles.Some examples even survived the war and can be seen being used in the rebuilding of Europe after the end of the war. This Das Werk model kit has been designed to offer a wide variety of display options. The front tow-bar is moveable, the front axle can be rotated, the upper ramps can be re-posi-tioned to the rear of the vehicle in a loading configuration (or the small, alternate ramps can be used and the forward ramps can be left in place, as is seen in some photos), the lower for-ward ramps can be installed in the stowed or raised configurations, and the rear axle can be left off in the loading configuration. Consult reference photos for configuration information. Features: Disconnectable rear axleMovable loading rampsNine rubber tyresDifferent decal options3 loading options buildableHitch fully movableRear ramps seperate included The basic version of the kit is already very detailed, but for those who want to refine their model, we have created some matching sets. These include suitable wooden decals, different resin tires or cargo.