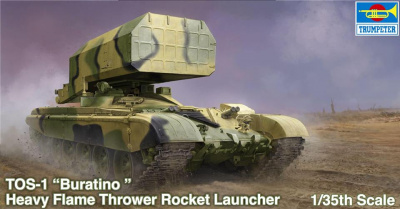 TOS-1 is a Soviet 220mm 24-barrel (Ob.634B or TOS-1A) multiple rocket launcher and thermobaric weapon mounted on a T-72 tank chassis. TOS-1 was designed for defeating enemy personnel in fortifications, in open country, and in lightly armoured vehicles and transport. First combat tests took place in 1988–1989 in the Panjshir Va­lley during the Soviet war in Afghanistan. The TOS-1 was shown for the first time in public in 1999 in Omsk.