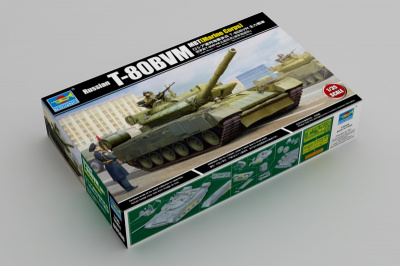 The T-80BVM is an upgraded version of the T-80BV main battle tank. It was first publicly revealed in 2017. The upgraded T-80BVM has slightly improved armor protection. It is fitted with Relikt explosive reactive armor kit. The same armor is used by the latest Russian main battle tanks, such as T-90M and T-90MS. However the T-80BVM was the first operational tank to be fitted with this new explosive reactive armor. The Relikt provides protection against tandem warheads and reduces penetration of APFSDS rounds by over 50%. The tank is fitted with rubber side skirts, with built-in armor plates. Rear parts of the hull and turret are covered by cage armor. The T-80BVM is reportedly fitted with a passive countermeasures system, which improved protection against some types of anti-tank guided missiles.