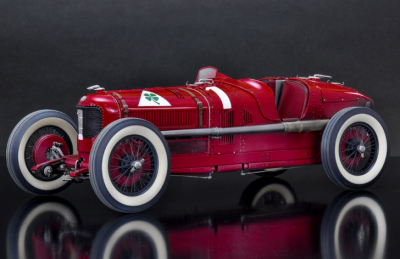 The Italian company Alfa Romeo was founded in the beginning of the 20th century, and have been involved in car racing ever since. With the success of the touring car “RL” which debuted in 1922, the Grand Prix car “P1” was developed for the following year. During the P1's debut race at the Italian Gran Prix, one of the drivers passed away in an accident during the practice run and further Grand Prix activities seemed grim for the team. However, the team would later introduce future-Ferrari designer Vittorio Jano into the team, who was working under the strongest team, Fiat, up until then. Yano's first design for the team would be the P2 – a car equipped with a DOHC straight-8 cylinder 2L supercharged engine. It debuted at the 1924 Cremona Grand Prix where it took its maiden victory, and it would see many victories after, even allowing Alfa Romeo to take the first ever Automobile World Championship in 1925.

– based on the P2 during its debut year, where driver Giuseppe Campari won the French GP with car #10, and driver Antonio Ascari won the Italian GP in car #1.
- a full detailed, multi-material kit featuring white metal, resin, etching, turned parts rubber tires, silk screen decals and various cords allowing for maximum representation of the original vehicle.
- aluminum turned parts used for wheel rim, wheel nut and meter.
- wire wheel built from a combination of aluminum turned wheel rim and stainless spokes allowing for realistic representation.
- white ribbon section and black rubber section of the tires have been cast separately allowing for tire to be presented in both colours.
- front bonnet can be opened and closed, and both center cowl and the top of the rear cowl can be removed, allowing full view of the detailed interior after completion.