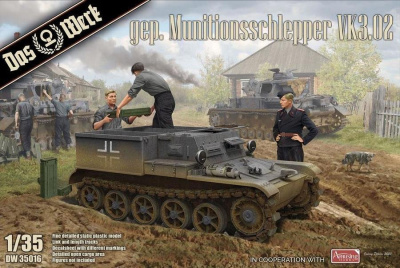 This is an injection-plastic military vehicle model kit. The 505th Heavy Tank Battalion was a heavy tank battalion of the German Army. It was formed at the end of January 1943, and participated in Operation Zitadele in July of that year as the Ninth Army. The battalion returned to Germany in July 1944 to add the Tiger II tank to their ranks, were sent to Poland in September of that year, and in February 1945 took part in the Konigsberg Siege in East Prussia; they surrendered to the Soviet Army in April 1945. Some of their vehicles were marked with a charging knight on horseback wielding a spear.  This kit includes a turret and hull with Zimmerit coating; photo-etched parts and link-and-length tracks are included. The main hatch can be opened and closed, and decals for two markings versions are included; it must be noted that no interior parts are included with this kit. Order yours today! [Includes]: Photo-etched parts, decals for 2 versions